What is A Good Shopify Score?

As a Shopify merchant, there are two words you’ll often hear that can make or break your entire store, “site speed.” 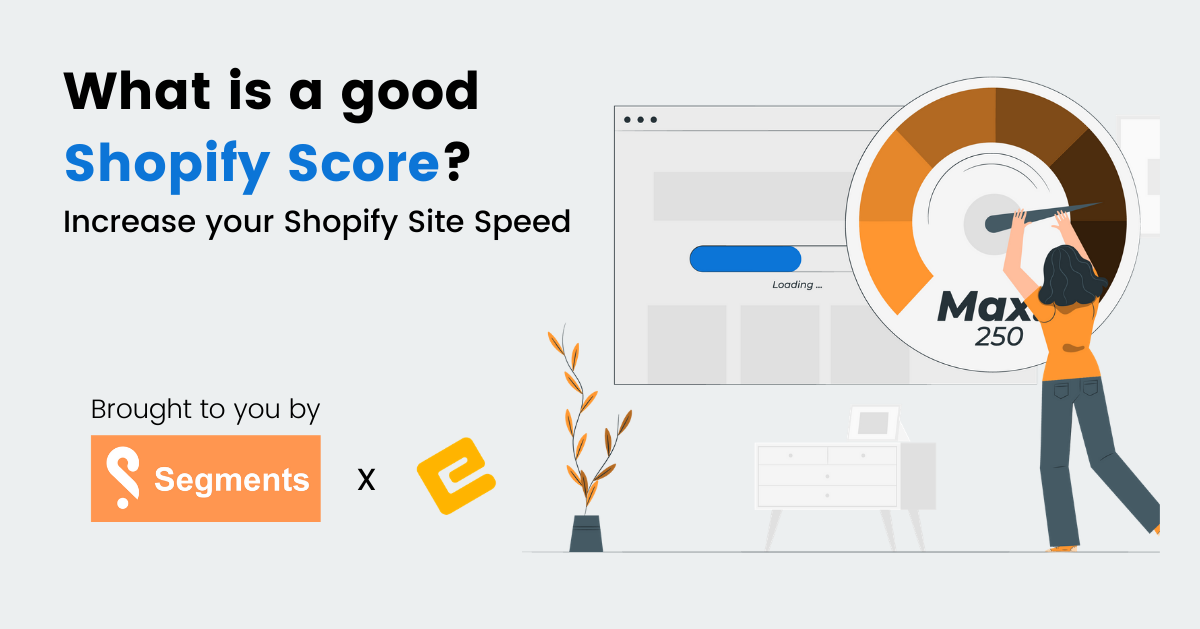 For this weeks blog we invited one of our partners, eComexperts.io to contribute on a very timely subject...

As a Shopify merchant, there are two words you’ll often hear that can make or break your entire store, “site speed.” Ecommerce stores need to be fast; this is because customers wait only a  few minutes to decide whether or not they’ll be making a purchase on your store

Just like with every eCommerce store, site speed is essential for Shopify stores. Imagine spending a lot of money directing ad traffic to your store, but when customers try to browse your store, it takes forever to load, and they eventually get tired and leave.

Higher bounce rates, low conversions, fewer sales are only a few of the problems of a slow Shopify store. In this article, we’ll walk you through everything you need to know about Shopify site speed, including what is a good Shopify site speed score, what might be causing a store to load slowly, and how to improve your Shopify speed.

What is Shopify Speed?

Shopify speed refers to how fast your Shopify store loads from when a user accesses a page on your store to when it fully loads. Google recommends that your store loads in under one second. To attain this number, your Shopify speed score has to be high. Before beating yourself up, a page loading speed under 3 seconds is also very impressive, but anything higher increases your bounce rates by 32%.

Your Shopify speed score, also known as Google Pagespeed Insights, is a number out of 100 powered by Google Lighthouse. Using different performance metrics, Google Lighthouse measures how fast your website loads to most visitors. This numerical score allows you to understand your site performance better and equips you with the tools to create a better user experience.

What is a Good Shopify Speed Score?

What Slows Down Your Shopify Store?

Your Shopify Speed score may never get to 100 as the more your store grows, the more additions and improvements you need to make to ensure that customers’ get the most from using your site. However, these additions while targeted at improving your store’s functionality in many cases end up slowing down your page loading speed reducing your store speed tremendously. These are some of the things that may be slowing down your Shopify store:

One major Shopify speed killer are unoptimized images. As your store grows, it’ll be necessary to include more banners, graphics and product images and the larger their sizes, the lower your speed score.

This is because web browsers take more time to load large and poorly optimized images causing your site speed to slow down drastically particularly on mobile. The size of your images are not the only problem killing your site speed, the number of images to be loaded also greatly accounts for lower speed score.

Another major Shopify speed killer is Shopify apps. In fact, the more apps you add to your store, the slower it gets. Adding more apps to your Shopify store reduces your Shopify speed score. This is because there are some apps that need time to communicate with Shopify's API and some others that rely on communicating with other less speedy servers.

Hence, as a tip, be sure to test your page speed before and after installing an app to determine its impact on your loading speed. Another tip is to check regularly to see if there are any dead weight apps (apps you no longer use and remove them).

While Shopify themes enhance the functionality of your stores, they are however responsible for also killing your Shopify speed. While choosing a Shopify theme for your store, be sure to crosscheck its compatibility with your website.

You should also make sure your theme stays up to date to prevent it from affecting your Shopify speed.

Tracking codes are another problem that have been discovered to be a cause of poor Shopify speed. Using a lot of tags to measure visitors and conversions might slow down your Shopify page.

In general, adding more scripts and components to a website slows it down.

Coding mistakes, not surprisingly, are a major cause of Shopify speed issues. Because of coding problems, it takes longer for a browser to load page elements it can't reach.

While codes may stop working over time in certain situations, it may not have been functional from the start in others.

As a result, it's important to keep an eye on the codes you've put to your site to make sure they're still working and aren't slowing it down.

If you're not sure where to start, reach out to our team.

Our team works with brands like Happy Coffee, Keller, Headphones.com and Prevail Jerky and we’ve helped increase their site speed. Take a look at their sites and experience the fast loading of their stores. Remember, improving site load times  will significantly enhance your Ecommerce rate, and help your shop will rank higher in Google organic search results.

Andrew Durot lives and breathes eCommerce. After his time at Airbnb, he founded ecomexperts.io- a world-leading speed performance agency. Andrew and his team specialize in Shopify store speed and site performance.

Segmenting on first party data
has never been easier.

Sign up for a 2-week trial with no commitments.